I always enjoy plotting walks on maps, connecting old monuments and interesting places, and the Kirklees area seems to have lots of curious things worth exploring. Phil wanted to test the Angelystor mobile app that he has been making recently in a churchyard with a yew, and I found a reference to the graveyard of St Peter's in Hartshead having a similar mythology to the Llangernyw recording angel on Kai Roberts' Lower Calder Legends blog. 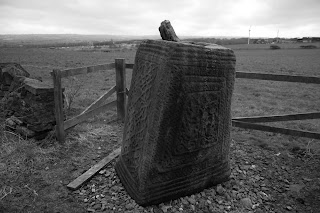 The Walton cross is across the road from Second Avenue, Hightown, set a little way off the road on a footpath. It's nice to see monuments provided with suitable access and still set in the location it was intended to rather than relocated to a museum, especially when it is an object of such immense beauty like this one. I don't think I've seen a roadside cross with such intricate carvings round these parts, you see them fairly frequently around cornwall  but this is a rarity here. I also haven't seen a Saxon cross with this kind of Tree of Life design before. 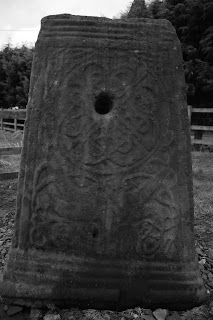 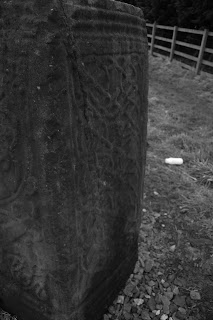 The WYAS dates it to the 10th or 11th C and says it would have been taller and brightly painted, making it a prominent landmark for miles around. Even in it's slightly depleted state it is lovely to see, and the socket at the top which, presumably, would have held the missing top part, was filled with rainwater like a little wart well and had a few coins deposited inside. 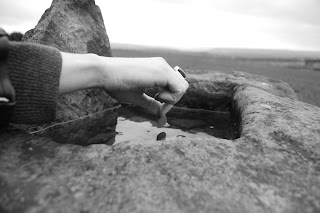 Following Windy Bank Lane down the hill, we turned at Ladywell Lane towards the church. I wish I'd done a bit more research before we came out because apparently the Lady Well is an ancient well in the vicinity of the church and is still visible under a hawthorn tree. One for a return trip I think. The church itself dates back to the Normans with it's carved chancel arch and doorway similar to Adel church, but most of the building is of a later date. 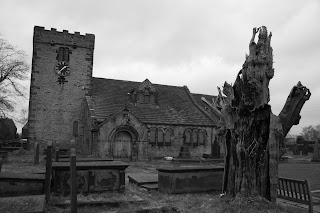 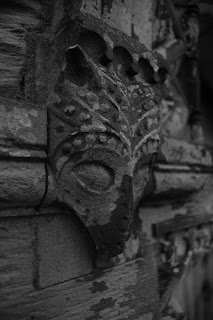 The churchyard holds the remains of a yew tree, even in death there are beautiful, gnarled patterns and twists to it's shape. Local legend has it that Robin Hood cut his last arrow (which he fired from his death bed to mark where he should be buried) from this tree. 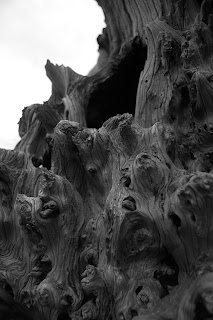 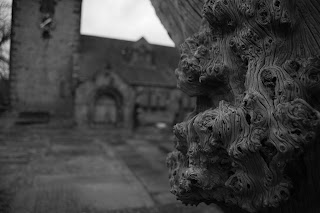 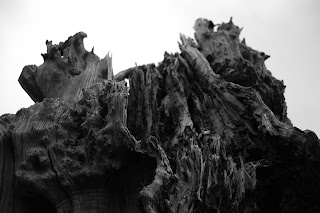 The churchyard also has numerous 17th century gravestones, and some possibly earlier. One medieval slab resembles early drawings of Robin Hood's grave, the gravestone of which has been replaced several times. 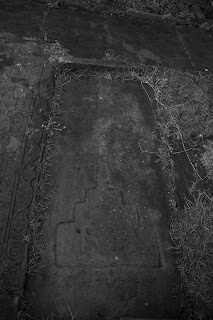 Compared with Stukeley's drawing of the original slab, the stepped cross of this stone does bear some similarities: 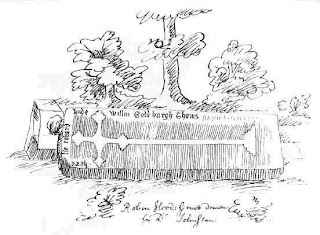 Aside from RH there are lots of old and beautiful monuments, including some Spiritus carvings, a favorite funereal motif of mine. 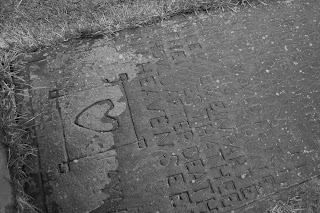 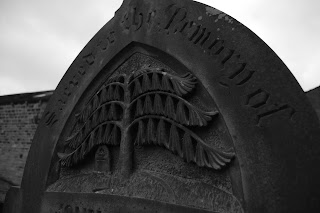 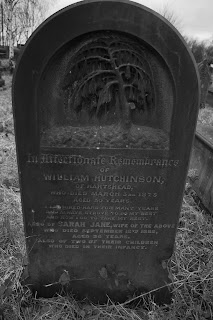 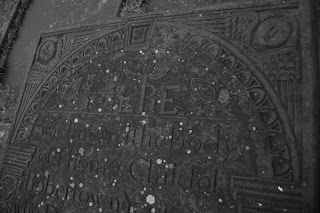 From the church we walked down Church Lane, continuing into the footpath through Hollin Wood off Hartshead Lane. The footpath continued through the fields towards the Nun Brook, and the ground seemed extraordinarily full of bits of broken pots and little broken bits of clay tobacco pipes. My guess is that a Victorian rubbish dump lies somewhere underneath, but perhaps there is some other explanation. 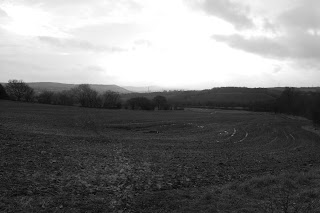 Once we reached Leeds Road we walked up towards Robin Hood's grave, I understand now that the site is on private land and access can be arranged, the whole Kirklees hall estate is in the process of being sold so it may be some time before permission can be sought. However in my experience, generally speaking, most landowners do not begrudge discrete and unobtrusive entrance on to their land. 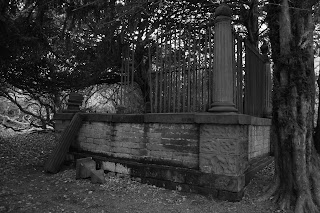 It seems a shame that, although access to this site should have been made public long ago, the interference of numerous societies and individuals has halted the progress of such a move by the previous landowners. It stands to reason that even the most open minded individual would object to an ancient relic under their care being advertised as some kind of supernatural theme park on the internet and it is sad that this has prevented more people from visiting such an atmospheric place. Mistakes are made with the best intentions though, and the new owners will hopefully have a greater desire to share the history of the place.

The grave is situated high on the rise of a hill, tucked under a grove of yews near the edge of a strip of woodland. 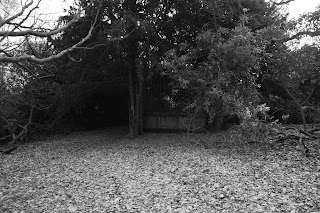 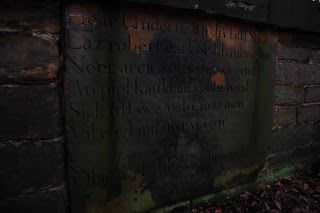 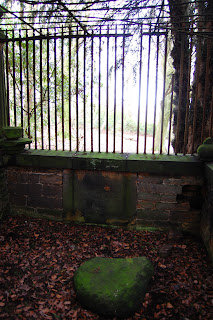 One side of the monument is falling down, dragging the cage of ironwork with it (supposedly erected in the 19th C to prevent Navvies from chipping away the stone which they used as a cure for toothache). The grave inside consists of a small, low boulder and a memorial slab built into the side of the stonework. 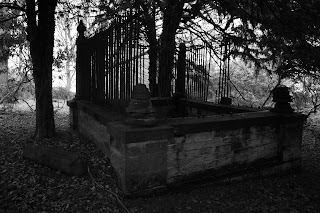 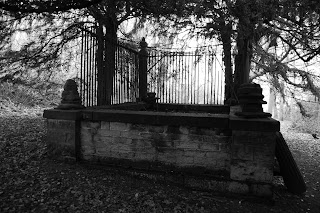 Walking northwards along the ridge you can also find the remains of a shooting tower, built to resemble a roman tower but now an unrecognisable mass of ivy and crumbling stonework. 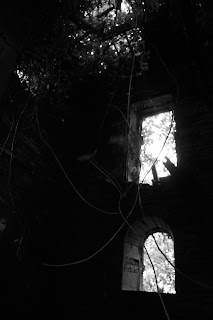 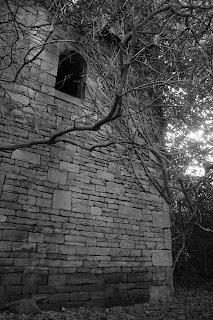 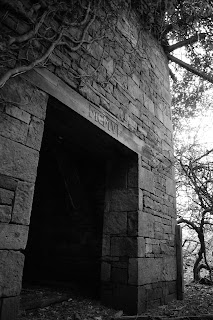 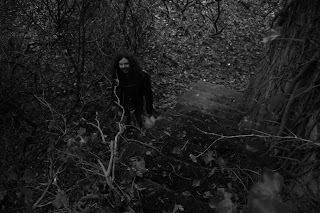 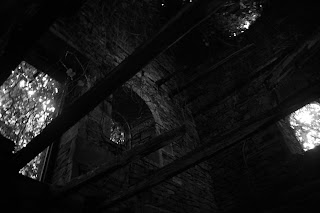 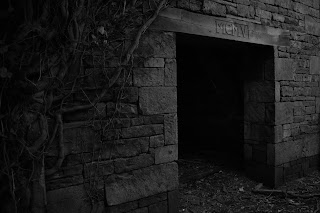 Here is a photo of it from 1910, it's slightly hard to believe that it's decayed so much!

Posted by Wyrd England Gazetteer at 11:18