The Witch in the Woods - Part One

The film Antichrist, directed by Lars von Trier, made me want to write a little about the thoughts and feelings I had following my viewing of it. I can't say I often feel compelled to write about film in general, and it deviates a little from the usual subject matter of this blog but as I found it resonated with many of the subjects I cover here, here it shall be. I've split it into two parts, this and the latter which will deal with the locations used in the film.

The film, very beautifully, seemed to be unraveling the concept of the female sex and its inherent evil. The two main characters in the film are not specifically named, their distinction in the credits is only by their sex - they become representative of a historical, diametric struggle between reason and insanity, good and evil, male and female. However, the film shows the flimsiness of these concepts and the liminality of the primal landscape which the characters immerse themselves in. The woods, having been a sanctuary from urban noise, modernity and aggression become a primeval dwelling of our savage nature - chaos reigns. The indwelling spirits of the woods from the classical age, Satyrs, became the image of Satan to the Christian mind: the woods lost their sanctity and now appear as realm of evil. The title itself - "Antichrist" - reinforces the duality as female evil as the opposite of the male ideal of Christ, punctuated in the film by the T of the word becoming the astrological symbol for Venus. Simon Bradley has written in more depth here about the possible symbolism occurring in the title imagery for the film. There is a playfulness to these touches in von Trier's work, his sense of humour being infamous, but this little visual quip seems in sharp contrast to the darkness of the film. Perhaps this could be seen as an aside before we step over the threshold, a small reminder that these absolutes we pretend are real and concrete; from male and female, evil and good are in fact as fictional as the film itself.

The film begins with a graphic scene of the couple having sex, whilst their child falls from a upper floor window to his death in what appears to be a tragic accident. It transpires that injuries that she inflicted upon the child while writing her thesis on "Gynocide", alone with her son in a cabin deep in the woods, contributed to the fall.

The tension between the two lead characters becomes more than just a struggle between two individuals trying to resolve grief. The pain of centuries of mistrust and gender unbalance rises to the surface, along with all of the tortured hallucinatory madness that is rife in records of witch trials from the 16th century: the topic of the thesis written by the female character, known in the film as She.

Her research in the film appears as collages over the walls of the cabin loft, scraps of woodcuts alongside random snatches of text, history devoid of any imposed organisation or structure. Instead of forming any coherent study into the reasons behind witch-hunts it becomes a shrine to the evil and consequent persecution of Woman, the two inseparable in this vision. The chaos she created allowed her the forbidden knowledge that, as a race, if we find ourselves in times of hardship, the women will be scapegoats and the sufferers for all of the ills that befall us. We are doomed to this fate that our ancestors have bestowed on us.
The male character, He, is a psychotherapist, and is in denial of the possibility of a physical root to the illness of his wife. His self-aggrandizing act, to insist that he discharge her to his care when not a MD, seals his own fate with his insistence that he knows her mind better than anyone, that he owns her. Her vulnerability through her physical and mental weak state means he may govern her, and reinstate his authority over her when she has previously lived in the cabin in the woods, engaged both in intellectual study and the care of their infant, outside of his territory.  The film has been perceived by some as misogynistic, I see it as the opposite of this. Lars von Trier has stated that he feels closer to She than He; he has repeatedly with his films dealt sympathetically and with great insight into the mind suffering from clinical depression, his later work Melancholia being a very clear vision of what is a difficult illness to convey sympathetically onscreen. One striking aspect of Antichrist is it's critical representation of cognitive therapy, the clumsy, patronizing and inane sentiments that he proposes to use to fix her, only further alienate her from the 'masculine' rationality he is imposing upon her suffering. He then becomes the victim as her illness manifests in violent psychosis, although it is hard to sympathise with his character knowing that he has endangered his own life and that of his wife by removing her from appropriate medical care into his own, taking them both to a remote location that has uncomfortable personal significance.

Reading the Malleus Maleficarum, a text used by the Inquisition for hunting out heretics written in 1485, you can get a sense of the extreme persecution women have faced throughout history. Chapter eight is dedicated to "Witches who hebetate the powers of generation or obstruct the venereal act", the act of miscarrying or preventing the conception of a child is considered an act of witchcraft (which is perhaps why in Question/Chapter six there is special note given to midwives, "who surpass all others in in wickedness".) The power that midwives had in early modern society, effectively assisting those between life and death made them highly suspicious individuals to the Inquisition. The midwives' role included providing medical care in situations where all else had failed, including the provision of potions to induce abortion. This put them in a precarious position, open to accusations of evil-doing and witchcraft despite their essential role in keeping a village alive.


The animals that appear in the film are bestowed with strange gifts, as familiars are to a witch. The dark fairy-tale of the fox talking as it tears itself apart, riddling Him with doubt with it's maxim - "Chaos Reigns". Much less a warning than a curse. The idea that a curse delivered by a woman holds power regardless of her initiation into any kind of witchcraft is one that seems to be embedded in folk narrative, the most obvious being the curse of menstruation which Pliny the Elder, in the volume on human biology from Natural History, lists it's destructive nature - even the use of a menstruating woman as a pesticide. The act of attacking another with the evil eye is also endowed most potently to women:

"It was anciently believed that women have more power of fascination than men. Varro accounts for their increased evil influence as the result of their unbridled passions..."

The gaze itself becoming a tool for supposed evil doing and persecution thereafter. In the last lines of the film She tells us:

"The crying woman is a scheming woman. False in legs, False in thighs, False in breasts, Teeth, hair and eyes."

She believes in her depression that Evil resides throughout her, that the pain and misery she suffers gives her power.

Elsewhere in the film, a miscarrying doe shows the female body imposing infanticide as a protective measure. We accept that animals under stress may abandon, kill or even consume their young, and the human body under stress may spontaneously abort a fetus as the cost to the woman's body of carrying the child to term would be too great. However the act of a mother killing a child is still one of the most shocking, even in cases of severe post-natal depression when the mother is acting in a state of severe psychosis. Acts of female violence remain a taboo, and the damaged individuals who commit them. She uses infanticide as test of herself to see she is truly capable of what history tells her she is. The violent mother becomes a motif throughout the film, birth and death repeated throughout. Later, the act of pulling Him from his hiding place in a hole mimics birth. Her almost nurturing gaze then is inverted, more cruelty is inflicted instead.

The animals appear again inside the cabin, as He takes control and strangles Her, their appearance reminded me of the many accounts of witches taking animal guise to escape capture, accounts of shape-shifting continuing well into the 20th century. After She falls, He finds himself alone in the woods, mockingly named 'Eden', where the witches hold sway and the ghost of matriarchy marches through the trees.

Matriarchy is a powerful myth and we are instructed to live in fear of the ominous powers of the oppressed evil that the female possesses. The Prehistory of Sex by Timothy Taylor has a chapter, The Venus in Furs, which brought to light some interesting points for me. It seems to be the most widely accepted myth that Woman once held sway over ancient societies, was worshiped for her abundance but as Orestes slayed his mother, so the goddess was overthrown. Figures like the Venus of Willendorf are often cited as evidence for a prehistoric goddess cult  but LeRoy McDermott's theory that the figures are self-representations of the female form rings true, as the way the female body appears looking down often seems distorted and large seems to be mirrored in many these figurines. This also suggests the radical notion that the creators of these figures were female themselves, rather than a male perspective allowing the female form to be idolised.

The worldwide notion of an malevolent female cult is very pervasive, it is used to solidify the position of woman as the underdog and to explain why men must then take charge. In the mythology of the Selk'nam people, E Lucas Bridges recorded that the male initiation rites included a story about the spirits that women used to use to control men until they were overthrown for abusing their powers. Part of the rite was to play out fights with other men disguised as the spirits. 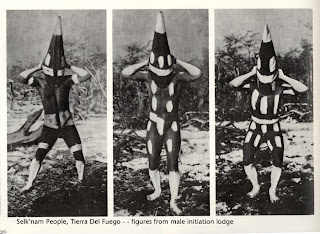 The myth was used as a valid reason for the outsider position of women in their society: the alleged ancient sins of their sex meant they were inherently evil and not to be trusted in a position of power. This inherited gender-biased blame resounds through our own culture today, for example as the measure to consecrate female bishops in the Church of England is rejected by the Synod. Attacks on alleged witches continue to this day throughout the world, the evil that women do is still considered far more terrible for the fact it is committed by a woman, Myra Hindley will always be the face of the acts that she and Ian Brady carried out regardless of her share of the blame. Repeating the ancient fears, we persecute midwives and women who, through psychosis, harm their children. Old habits die hard.

Posted by Wyrd England Gazetteer at 19:16